Your Havana cruise will introduce you to the sights and sounds of the colorful capital of Cuba. 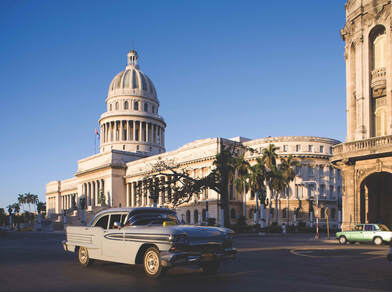 Havana Capitol
The history, music and colorful streets of Havana are fascinating. Founded in 1515, Havana became the capital city of Cuba at the end of the 16th century. La Habana (in Spanish) is the largest city, major port and most important commercial center in Cuba. La Habana offers endless history, old cars, cigars, rum, and salsa music. It’s a spectacular view to see the waves attacking the famous boulevard El Malecon. The Malecon is the place where loving couples walk along the colorful boulevard arm in arm. La Habana, a city which makes you want to go back in time to when time seemed slower and the living was easy.

Once you disembark your cruise, you can immerse yourself in an unforgettable experience learning about Havana’s culture, history and its amazing people. Havana is divided in four main districts, all of which offer distinctive features and things to do.

HAVANA VIEJA (OLD HAVANA)-- This area has the most colonial buildings and is the most visited area for tourists who visit Havana, but it's also its most beautiful spot. Foreigners walking through the streets, taking pictures, or just having a (Cristal) beer. Habana Vieja is famous for the Catedral de San Cristobal de la Habana at the Plaza de la Catedral, and for Hemingway's bar, "La Bodeguita del Medio", where you can buy an expensive mojito.

HAVANA CENTRO--The Capitolio marks the beginning of central Havana, a working class neighborhood, where many of its buildings are almost in a total state of collapse. On the other side of the street you will find Real Fabrica de Tabacos Partagas one of Cuba's oldest cigar factories. The first factory bulding, born on Calle Insdustria in the 1850’s, is very emblematic to Cubans and cigar lovers from all over the world. You can still buy cigars at the former factory, but cigars are no longer rolled there. The new Partagás Factory is in the corner of Calle San Carlos in Central Havana, about a block down from Romeo and Julieta factory and less than 10-min drive from the former Portagás venue. Centro Havana is the place to capture the real life in Cuba's capital. You can’t tell people you visited Havana if you did not go to Havana Centro.

HAVANA VEDADO--Located along the waterfront, it was developed during the decades between 1930 and 1960, when Havana developed as a major destination for U.S. tourists. High-rise hotels, restaurants, and upscale commercial establishments, many reflecting the then-popular art deco style, mushroomed in the Vedado district.
In the late 1990s Vedado represented the principal commercial area of the city, and its environs were home to a variety of important landmarks including the Hotel Nacional, the University of Havana, and the Colón Cemetery.

The capital city of Havana is far too interesting to see all in one day. There is so much to explore in Havana that you’ll wish you could stay longer. Havana is a very vibrant place, and you will want to capture as much as you can while you are there. So, when you are in Havana, make sure you talk to a typical Habanera to learn more about the city. A typical “Habanera or Habanero” basically means someone who was born and raised in Havana and, most importantly, is in love with the city. You will enjoy and dance world known rhythms such as Mambo and Cha-Cha, originated in Cuba, as you tour this extraordinary city. At the end of the day, you will want to enjoy an evening performance at the historical Tropicana Theater or alternatively stroll to nearby Café Taberna, where one can enjoy Cuban music by the famed Buena Vista Social Club. Endless history, magnificent architecture, passionate people, colorful antique cars, fragrant cigars, tropical rhythms, and a delicious mojito await you in Havana. You will naturally love Havana!