Known as Cuba’s Perla del Sur (Pearl of the South), Cienfuegos is a captivating community located along the southern coast of Cuba, just 145 miles from Havana. 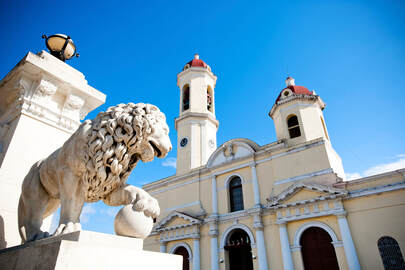 Catedral de la Purisima Concepcion
Founded by the French in 1819, this scenic city has become one of Cuba’s most important seaports with exports that include sugar, tobacco and coffee. With its elegance and enlightened French spirit, Cienfuegos has long seduced travelers from around the world. Some visitors call it the Paris of Cuba.

Situated along the country’s most spectacular natural bay, Cienfuegos is a nautical city with an enviable waterside setting. While this city is one of Cuba’s most recent settlements, it is one of the most architecturally interesting destinations--one of Cuba’s several UNESCO World Heritage sites. Geographically the city is split into two distinct parts—the colonnaded central zone with its charming Paseo del Prado (commonly shortened to Prado) and Parque Martí; and Punta Gorda—a thin knife of land slicing into the bay with eclectic early 20th-century palaces, including some of Cuba’s prettiest buildings. Popular destinations are the Castillo de Jagua, a solid limestone fortress situated right in the canyon of the entrance of the bay, built to protect the area from Caribbean pirates and in honor of King Ferninand VII and  the Jardín Botánico de Cienfuegos ( Cienfuegos botanical garden), home to extensive collection of tropical plants.

Cienfuegos locals are known for their innate nobility, which adds charm to the city and attracts more visitors to come and explore this pearl and its history. The history of Cienfuegos possesses interesting antecedents and is rich in aboriginal and Hispanic legends. Before the Spanish conquistadors came to America, the zone was originally settled by the Taino indigenous people. The area where the city lies was known as the Cacicazgo de Jagua. Cacicazgo translates from the Taino language as “chiefdom”. Cacicazgo de Jagua was therefore the chiefdom of Chief Jagua. The city was later settled by French immigrants from Bordeaux. These settlers named the city Fernandina de Jagua in honor of King Ferdinand VII of Spain. You will encounter that French influence in the names of many of the streets in old town. The settlement successively became a town in 1829, renamed by José  Cienfuegos, Capital General of Cuba and a city in 1880. Literally translated “Cienfuegos” means one hundred fires.

It often said that Cienfuegos has the best shrimp and lobster. This is something you will want to find out by making your way to one of the local restaurants. Cienfuegos offers many many different dining options that go from very elegant to a typical rural palm-frond-roofed wooden ranch you can enjoy the different dishes from the national and international cuisine.  Once in Cienfuegos, you will probably want to make your way to the beach too. Rancho Luna Beach is just 11 miles from Cienfuegos. The beach has good ecotourism programs, and scuba diving and other water sports, offering you what you need for a relaxing escape on this cruise stop.

Cienfuegos’ architecture is simply beautiful! In its surroundings coexist, harmoniously, buildings from the end of the XIX century and the first half of the XX, in eclecticism dominated by neoclassic cannons. This historical center has been declared a National Monument for its exclusive patrimonial value.The French influence is notable in many cultural traits and Cienfuguerian customs, particularly in architecture, where arcs, stained-glass windows and bars prevail and it is common to find palaces and mansions. The streets, of perfect design, are wide and straight, and give Cienfuegos, the flavor of being an enchanting city. After seeing Cienfuegos, you will want another cruise to Cuba again.